It can be extremely overwhelming for an individual to sit and think about the impacts of climate change. With the hottest June and July ever recorded alongside two of the wettest years in Pennsylvania history, we see and feel it happening. (Que existential dread.)

But with these mountainous challenges come the challengers invested in inspiring others and generating positive environmental impacts, one being Zaheen Hussain, Director of Sustainability at New Sun Rising.

Named one of NEXTpittsburgh’s “25 Essential Pittsburghers” for “his groundbreaking work building the Triboro Ecodistrict,” Hussain said his dedication for environmentalism and climate change was instilled in him at an early age.

Hussain immigrated from Bangladesh to the United States in the 1990s with his family in part due to the growing climate crisis. Even then, his father was aware of the position Bangladesh would be put in 100 years in the future: under water.

“The climate change conversation today in America is where the rest of the world was in the early 90s,” Hussain said. “The Rio [de Janeiro Earth] Summit, the Kyoto Summit… America committed to taking action on slowing down climate change and building resiliency, and then that went away.”

Bangladesh has a population of around 165 million people and as Hussain put it, is “about the size of Wisconsin,” which has a population of around 6 million. Alongside impending climate change and to increase the access to opportunity and quality of life for their family, Hussain’s parents applied for the Diversity Visa Program and began the process of emigrating to the US.

In high school and throughout college, Hussain studied environmental technology, environmental science, and natural resource economics, “but the policy and economic side really spoke” to him. After graduating college, Hussain worked as a park ranger at Harkness Memorial State Park and William A. Niering Nature Preserve in his home state of Connecticut.  It was then that he started searching the country for sustainability work around policy and economics, and applied for a number of Student Conservation Association Green Cities fellowships here in Pittsburgh.

“I didn’t get any of them, but the program manager opened my eyes to an opportunity with GTECH [now Grounded] Strategies for the Green Economies Initiative,” Hussain said. “I moved to Pittsburgh in February of 2012 thinking I’d be here for 10 months to build experience and go back east, but seven and a half years later here I am.”

Hussain said a large part of his professional journey has been the implementation of the Millvale EcoDistrict and Triboro Ecodistrict initiative in Millvale, Etna, and Sharpsburg that for him began in 2015 when he was hired as Millvale’s Sustainability Coordinator. The Millvale EcoDistrict Pivot Plan began in 2013, “which looks at Millvale’s economic development through the lens of sustainability in food, water, energy, air quality, mobility and equity,” Hussain said.

Christine Mondor, Principal at evolveEA, met Hussain after he was hired as sustainability coordinator and said literally and figuratively he was a “breath of fresh air for [Millvale’s] efforts.” Mondor said the two specifically did a lot of work together monitoring air quality, and that Hussain is “passionate and nerdy about it in the best way possible.”

In 2017, Hussain became Director of Sustainability for New Sun Rising while continuing his work as Millvale’s Sustainability Coordinator and “implement[ing] the Ecodistrict plan with attention towards leadership development,” Hussain said. “[Therefore], community organizations and individuals can become more empowered to be the leaders of the work and rely less on outside capacity.”

“Sustainability isn’t always about being green,” Bykoski said. “He’s good at making sure equity and the needs of disadvantaged communities are part of the conversation and that the development that’s happening is equitable.”

With Pittsburgh being one of the worst cities in the country for air pollution and related deaths, Hussain said he is concerned by the continued investment in fossil fuel economies in the region and how that will negatively impact the progress made in the area involving environmental quality and quality of life.

That kind of meaningful and cogent argument is a genuine sentiment from Hussain that encourages individuals, communities, and organizations to do better.
“He’s a very inspirational person and he makes you care more and want to do more,” Bykoski said. “The world would be better if it were full of Zaheen’s.” 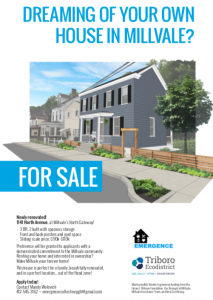