Over a year of monthly meetings for the Etna EcoDistrict Community Education Series led to five groups of borough residents and cohorts receiving $2,000 each to fund their projects during the EcoDistrict Idea Round-Up on January 9.Teams were guided by seasoned mentors and each had a dedicated focus on air, mobility, water, energy, or food, and all were required to incorporate equity. Those involved in project planning had been engaged with Etna’s EcoDistrict process in some way since January 2018 when the community education series began.

Etna EcoDistrict Fellow Alexis Boytim said that building equity, the common thread among all the projects, “was represented by a focus on community education 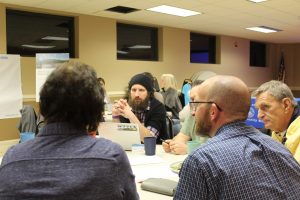 and engagement, which is essential to empowering people.”

For example, the air quality team chose to create an educational event that will accompany the future tree planting in Clarence Fugh Memorial Park. In 2017, trees had to be removed because of disease and recently the borough received a $50,000 grant from the Allegheny County Health Department Clean Air Fund to replace the trees. The event will debut signage with information about the trees and the import role they play in preventing pollution.

Jessica Jankowski, Etna’s economic development coordinator, chose to work with the air quality team during the Idea Round-Up because she believes that “especially in our region, air quality is a bigger beast” with Allegheny County ranked among the poorest air in the nation.

Brian Wolovich, Triboro Ecodistrict Director for New Sun Rising, said this was the first time Etna residents received funding to implement their ideas and it’s meant to act as a “small win” while the EcoDistrict planning continues.

“Some residents understand that projects can take two years of planning before [results] occurs, and others need to see something quicker to know a process is worth while,” Wolovich said.

Boytim said 2019 will be “dedicated to following more of the EcoDistrict Protocol” and more community meetings to ensure Etna residents continue to be engaged in developing the best EcoDistrict plan for their community.

The next meeting is scheduled for 6:30 p.m. on Wednesday, February 6 at Fugh Hall, 27 Crescent St. During the evening, six education booklets will be distributed that focus on air, energy, equity, food, mobility, and water. 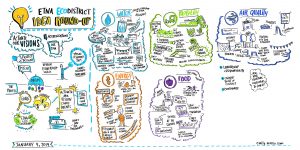