Above: Mary Ellen Ramage, Etna Borough Manager, speaking with attendees of the 2019 EcoDistricts Summit about the future ECO Park during the Triboro Ecodistrict neighborhood tours.

In early November during the 10th Annual EcoDistricts Summit, the Borough of Etna became the world’s first certified EcoDistrict, a feat that Borough Manager Mary Ellen Ramage never thought possible because “it’s not something you ever think about.”

“Never in my life did I dream that I would be part of anything that was the first in the world,” Ramage said.

Through a proclamation presented by Etna Mayor Tom Rengers, this Wednesday, December 11 will be recognized as Etna EcoDistrict Day, which coincides with the sold out EcoDistrict Celebration at Fugh Hall where the Triboro Ecodistrict partnership will be honored and Etna will publicly launch its EcoDistrict Plan.

Before embarking on the certification process, the borough already had a focus on sustainable practices including its Green Infrastructure Master Plan, Storm Water Management, and Green Streetscape projects, but the community’s interest in ecodistricts began in late 2016 at the EcoDistricts Micro-Incubator in Millvale.

Led by Triboro Ecodistrict Director Brian Wolovich and Millvale Sustainability Coordinator Zaheen Hussain, the micro-incubator informed participants of the EcoDistrict Protocol, how it worked when Millvale began the process in 2012, and practiced visioning sustainable development using the Protocol. Etna Community Organization (ECO) Board Member and borough resident Robert Tuñón said he and Mayor Rengers attended the workshop together.

“Both Etna and Millvale were making great strides in their physical improvements, but Tom knew the Ecodistrict movement in Millvale was catalytic in getting people to stay involved and volunteer,” Tuñón said.

They left the micro-incubator and shared their knowledge with a small group of municipal and resident leaders, and started gathering information to create an asset based map that identified the positive things already happening in the community and how they could be built upon. Tuñón said these small meetings continued and slowly grew to around 40 residents before the initial public meeting in March 2018 that had over 100 people in attendance.

“We were shocked at the ability to have a grassroots movement start in the community with very little resources,” Tuñón said. “At the time we had no funding.”

Just a few months after the first public meeting, Etna received funding from the Henry L. Hillman Foundation through its partnership with the Triboro Ecodistrict, which also includes Millvale and Sharpsburg. The financial backing advanced Etna’s efforts and allowed them to hire evolveEA and begin an educational series that addressed a key component on the path to becoming an EcoDistrict: offer multiple rounds of opportunities for the community to give input and engage in the planning process, demonstrating that it’s an equitable plan.

Ramage said the educational series, a total of 35 public events, was “one of the most amazing things about the EcoDistrict process” and that she was “mesmerized” by residents engagement.

“People aren’t given enough credit,” Ramage said. “They just need an opportunity to learn and see how they can help and how they can be part of the change. It’s empowering.”

Including equity, communities pursuing the certification must address two other imperatives including “resilience with a broad lens that prepares for social, economic and environmental shocks and stresses,” and climate protection by building “a pathway to carbon neutrality,” according to the EcoDistricts website.

After the third report was submitted, Boytim had a call with the national organization and that’s when she was informed that Etna was on track to become the first certified EcoDistrict.

“We didn’t realize that would ever be a possibility,” Boytim said. “When we found out, we were excited of course, but recognized that we wouldn’t have been able to do that or even be where we are without the work done before us and [the partnership with the] Triboro.”

Tuñón echoed Boytim and said the Etna EcoDistrict would not have been imaginable without the guidance from Brian Wolovich in Millvale, Brittany Reno in Sharpsburg, and Mary Ellen in Etna.

“They were able to teach us from their lessons learned and pass those on to us, so in many ways some of the success we feel we’ve had was based on building off their experiences,” Tuñón said. “It all ties together.”

A few projects on the horizon for Etna are the creation of the Etna Community Library and the Etna EcoPark planned for 37 Grant Ave. where a blighted building once stood and is now a vacant lot that the borough recently acquired.

These projects are two reminders that the EcoDistrict certification is just the beginning. Over time, Etna must complete certain goals they set for themselves, track the boroughs progress, and report transparently to the national organization on how they’re doing, Tuñón said.

“The hard work starts now, but it’s work that you understand will make a difference far into the future,” Ramage said. “You have to leave it better than you found it… and that’s what EcoDistrict is all about.”

You might see varying forms of capitalization when exploring the idea of an ecodistrict in your community. This is intentional, and they each have their own meaning:

During the 10th Annual EcoDistricts Summit in Pittsburgh last month, the organization initiated the first EcoDistricts Citymakers Awards on November 4 at Phipps Conservatory where key individuals, organizations, and neighborhood projects were recognized for fueling the EcoDistricts movement.

The awards, presented by EcoDistricts CEO Rob Bennett and Brionté McCorkle, ED of Georgia Conservation Voters, acknowledged and celebrated the work done by sustainable development leaders and catalytic district- and neighborhood-scale projects that are working towards a more equitable and sustainable future in urban communities.

“The EcoDistricts movement is led by an inspiring number of urban changemakers. The work is hard and takes time. The work is critical to the future of our cities, communities and planet,” said Bennett. “I’m thrilled to acknowledge their relentless effort and commitment, much of which is done quietly and behind the scenes on behalf of their communities.”

Among a select number of awardees included:

The Borough of Etna for becoming the World’s First Certified EcoDistrict in October of this year. The borough completed a rigorous verification process that assessed the Borough’s project governance, integrated implementation roadmap, and commitments to equity, resilience and climate action. Etna EcoDistrict receives support from New Sun Rising through the Triboro Ecodistrict and Sustainability VISTA.

“Being an outlying borough with a long history of environmental/economic traumas, this moment to be recognized for something positive, as a leader, and the first Certified EcoDistrict is so rare, so special, and so meaningful to us,” said Robert Tuñon, a district leader in Etna’s planning and community engagement process.

Millvale Ecodistrict for the formation of its award-winning EcoDistrict Pivot Plan, which led to a broader partnership between Sharpsburg and Etna, and the creation of the Triboro Ecodistrict. The Borough, Millvale Community Library, Millvale Community Development Corporation, and New Sun Rising have committed a tremendous amount of time and energy to Millvale and EcoDistricts by hosting and planning trainings including the EcoDistricts Incubator this past April that was held at the Millvale Food + Energy Hub. The borough is currently pursuing EcoDistrict certification.

The City of Pittsburgh for leadership in advancing neighborhood and district-scale equitable and sustainable development throughout the city and fostering growth for areas like Larimer, Uptown, Homewood, Millvale, Etna, Sharpsburg, downtown, and the Lower Hill District. Recently, the City has deepened its commitment to sustainability by becoming the first city in the United States to officially adopt the EcoDistrict Protocol to guide further neighborhood planning.

“The EcoDistricts Protocol helps sharpen the City’s commitment to bringing racial equity and environmental sustainability to all Pittsburgh neighborhoods. We are proud to be an EcoDistricts leader and hope our commitment inspires other cities to follow suit,” said Grant Ervin, City of Pittsburgh Chief Resilience Officer.

Surveyed through the Millvale Library Community Needs Assessment and identified by the community led Millvale EcoDistrict Pivot Plan, affordable housing and workforce development emerged as key priorities. In support of these identified needs, New Sun Rising is leading a pilot project that will simultaneously work towards addressing these needs.

NSR will be providing programmatic development and technical assistance to build and strengthen the neighborhood-specific contractor workforce here in Millvale, while also supporting general workforce development and affordable housing needs.

Millvale-based development company and project partner, Chunky Skunk Holdings, has acquired a property at 1141 North Ave. in Millvale. The project will provide contracting work for local residents, and once rehabbed, become a pilot affordable housing project. The purchase of this property was made possible thanks to financing by the Borough of Millvale Revolving Loan Fund.

Brian Wolovich, the project manager for NSR, notes the ways in which this initiative is in line with community and EcoDistrict priorities,

The Millvale Ecodistrict Plan’s Equity section calls for action to “Maintain affordability and build community wealth” through encouraging “property acquisition by existing stakeholders to prevent displacement of current residents.” The Equity section makes multiple references to using a variety of affordable housing strategies. Also, the Millvale Community Needs Assessment identified a number of residents who are currently renting (and vulnerable to rising rental costs) who would like to purchase a home in Millvale and are interested in assistance. This program is also being developed in response to that resident feedback.

Zaheen Hussain, New Sun Rising’s Director of Sustainability will be completing Radon testing using radon monitors checked out from Millvale Community Library. Additional testing will identify environmental health conditions and potential hazards. The initial build-out will be completed with the help of community volunteers, and professional contractors hired will be Millvale resident contractors.

After the rehab process, the property will be made available for sale to an income qualified family from Millvale.

Those interested in becoming more involved in this process or who want to learn are welcome on-site on Saturday, April 28th for a volunteer Spring cleaning and open house. 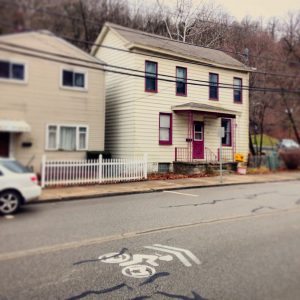