Above: “Short Break” by Wildstyle Paschall for All317HipHop. Paschall was a speaker during the first Positive Deviants Virtual Retreat in May.

When you think of Positive Deviants, what comes to mind?

“Disruptive. Creative. Persistent. Aren’t afraid of being on the outside, on the fringe.”

It is that question, and those answers, that kicked-off the inaugural Positive Deviants for Community Transformation event on Friday, May 6. The virtual half day retreat had attendees from across the country and world connecting with organizers, featured guests, and fellow participants to uncover new ways of thinking and doing and expand the practice of positive deviancy. 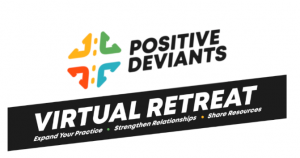 The idea for this pilot series came about when Positive Deviants in Dayton, Ohio, Indianapolis, Indiana, and Pittsburgh, Pennsylvania joined together for a conversation around shared values and discovered a bond beyond geography and regional challenges; there was a kinship found through the innovative and transformative work that grassroots change agents were doing in their communities, often without recognition or sufficient resources.

Retreat host James Saleem addressed the importance of the Positive Deviants approach to community transformation, saying, “In this moment, we have an opportunity for us to grow, trust, and build bonds with one another across these three regions and larger. It’s important to have a network of people who have the ability to open up certain doors that we can’t open up ourselves.”

DeAmon Harges, ABCD Institute faculty at DePaul University, founder of The Learning Tree in Indianapolis, and keynote speaker for the event, said “the most Positive Deviant thing we can do is be friends, and deviating from the status quo includes friendship.”

Host James Saleem closed the retreat with a call to action: “”Please take this opportunity to broaden our reach by sharing your connections with us. Think about your communities. Nominate the positive deviants you know: deviant social workers, community workers, and artists- anyone breaking the mold to better our communities.”

This pilot series includes a total of three national conversations at the intersection of community transformation and creative expression, led by the people who are actually doing the work. The next two retreats will be held on August 12 and November 4. Register for the August retreat on EventBrite at this link. The Positive Deviants co-creation team is now accepting nominations for storytellers and artists for upcoming retreats, workshops, and social media boosts.

This series was co-created by The Collaboratory, New Sun Rising, and The Learning Tree. Join the community, access resources, and spark a conversation in the forum at wearepositivedeviants.org.

Funding was generously provided by Grassroots Grantmakers, a national membership organization comprised of place-based funders, advocacy organizations and community organizers that values and leverages resident and civic engagement as a catalyst for creating and driving sustainable community improvement strategies.